On September 9, 1967 at 2 o’clock in the afternoon, a girl stood before a boy in uniform, her face veiled in tulle. Her small frame was fitted with satin from bodice to floor, her neck and chin set confidently above a delicate, scalloped lace overlay with sleeves. The design is simple and timeless.

I can only imagine what they were thinking as their hands joined in front of a small audience of close friends and family, as heads bowed in prayer, before finally hearing the words:

I now pronounce you husband and wife.

The girl was my mother. The boy was my father.

When I look closely at the details in the wedding photos kept in the small, broken album – some of them cracked with age – I find myself longing to know two strangers who only seem familiar.

My late grandmother leans in to kiss the girl, whose face is set candidly in mid-sentence. What did they say to one another? The boy smiles at them, at ease, his face animated in happiness. Or is it amusement?

Their young hands clasp two glasses filled with punch. I see lemon and lime slices floating atop the ice in the bowl.  Their hands join to cut into the lower tier of a two-tier cake. Their hands feed the cake to one another. They are the hands of a boy and a girl. Young hands.

The boy winks as he slips the garter from the girl’s left leg – she looks down upon him, smiling and bemused.

It was a time when ladies wore white gloves to a wedding, I notice. They threw rice instead of birdseed, I notice.

I look at the familiar strangers and I wonder what their voices sounded like that day. Would I recognize their voices? When they laughed in 1967, did it sound like their laugh today? What did they think tomorrow held?

And at the end of it all, the girl leans into the back seat of a car. She lifts the satin from the ground, steps in, the bouffant of her veil brushing the roof of the car. It’s the money shot. The best last shot of any wedding album I’ve ever seen. Her smile is broad and hopeful. Her eyes twinkle. This is her day. And it’s the first day of the rest of her life.

For most of us, there was a time when our mothers were the only ones who truly knew us. But there comes a day when another may know us better. One of many things I’ve realized over the sixteen years of my own marriage is that no one knows me like my husband knows me. No one knows him like I know him. There is something inherent to the day-in-day-out, side-by-side, cheek-to-cheek living – the struggles, the triumphs, the banality – that vines partners together in a way that is distinct from the parent-child relationship, and that’s as it should be. The goals and purpose of each relationship are unique, after all.

We just celebrated the momentous occasion of a boy and a girl’s 50th wedding anniversary this past weekend. Before the many friends and family arrived for the open house set to celebrate the occasion, I asked my parents: What is the secret to staying married for 50 years?

First, they both laughed and agreed that my mom was likely the secret, both playfully conceding that she’d put up with a lot over the years.

Give and take, they said.

I asked about their toughest challenge, what it was, and how they endured.

I asked what they would tell someone getting married today – what advice they’d give.

There will be ups and downs, they said.

We talked about finances, being happy to have less, making the best of what you have.

I probed and received a few other bits, but the algorithm for marriage success was not going to be divulged, and if you know my parents, this isn’t surprising. They are kind, steadfast, simple people who aren’t loquacious. The secret to their marriage is buried deep within the day-in-day-out, side-by-side, cheek-to-cheek living – the struggles, the triumphs, the banality.

The secret is in the vines.

When two vines intertwine, there are only two options. They survive together, or they don’t.

The vines have spread, somehow weaving themselves, each without strangling the other. The vines survive together, sharing the sun and the rain, reinforcing each other during wind, eschewing and allocating resources in times of drought. The vines have entwined and proliferated across ground, over fences, into cracks, and up walls, planting new shoots along the way.

To know how the vines survived the long journey together would mean sorting out the tangles, leaf by leaf, to their origin – to examine inch by inch, the plump leaves, the holey leaves, the ones that have died and fallen from the vine, the areas of entanglement and areas of order, the sections of vine that are strong, and those that are thin and weak, and where they diverge and come back together.

But you can’t. When vines have been together for 50 years, the secret of how they survived becomes hidden in the garden they’ve covered, and the best you can hope for is to glean something from the surface visible today.

I realize, there isn’t a secret. The vines survive together or they don’t. Their survival is dependent upon a multitude of factors, some of which they reveal and others they don’t.

I will only know deep within my heart the profound gratitude and joy that God planted two vines one day – that they found each other – and grew magnificently. Tangles and all. 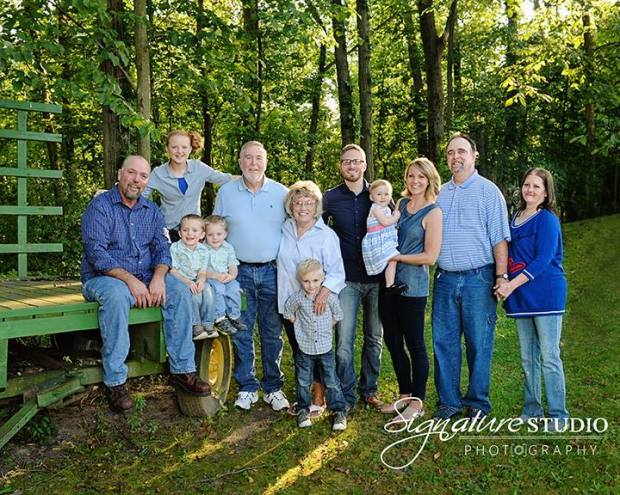 A huge thank you to Jamie of Signature Studio Photography in Winona Lake, IN for beautifully capturing the love that has grown from two vines. Visit Signature Studios or follow them here.

4 thoughts on “The secret to staying married for 50 years”

Essays and musings about life as a Midwestern mom, wife, and aspiring Paleo convert. I work full time and write for funsies. You know...when I have time. Which is almost never. I write from the heart, which sometimes includes poop and swearing. This isn't The New Yorker.