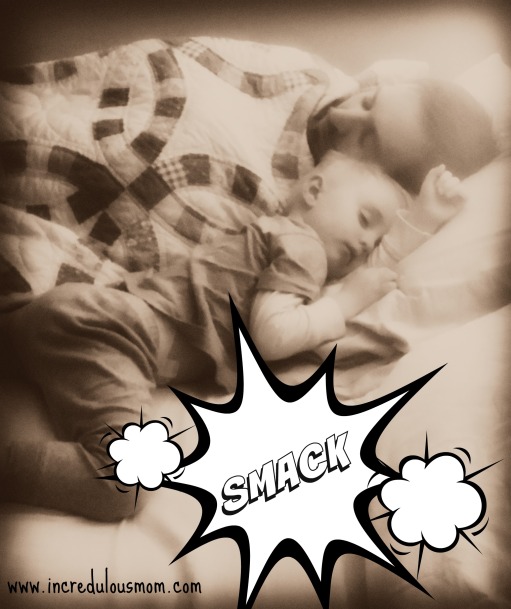 I’ve managed to make it 35 years in this life without ever having been slapped in the face.

In my blacktop days, I was shoved down by one kid while another kid held my hands behind my back. One entire side of my face smeared into meatloaf as my cheek met the asphalt. It wasn’t pretty. But it was all made better when my older brother’s best friend, Ben Anderson (swoon), told me he’d beat up the perpetrators for me.

In my playground days, I was choked out by a friend over a merry-go-round incident. All I did was continue to push the merry-go-round really fast while she shrieked to get off. For some reason she got all irrational and tried to strangle me when I finally stopped the ride.

In my double-dare days, I told a pal it didn’t even hurt when she dug her nails into my hands. I dared her to try to make it hurt. We stared each other down as she scratched harder, until her grime-ridden third-grade talons embedded themselves into the flesh of my skin and yanked. Spoiler alert: I bawled and tattled immediately to Mrs. Ousley, who hugged me and gave me a sucker from the special candy jar behind her desk while reprimanding my assailant.

I’ve had my (arguably small) share of human-inflicted wounds. Granted, they all occurred during my elementary years, and granted I may have deserved them (except that blacktop episode…I can picture their smug bastard faces, but their names evade me).

Then again, I’ve never had a 2 year old before. And now I do. Subsequently, I’ve been slapped more during the past six months than Moe slapped Larry or Curly combined. My husband has had his glasses slapped clean off his face…by a hand no bigger than a gerbera daisy.

Please don’t misunderstand. Our wee spawn is 95% lovable, snuggly, funny, witty brilliance and only 5% malevolence, but there comes a point when one must draw a line in the sand. When you look across and dare your opponent to just try that again. I [bleeping] dare you. (Unless it involves clawing someones hands until they cry. Avoid that.)

This morning, I drew the line.

Actually, it’s invisible, and I just now made that declaration and have no idea what it really means going forward, but here’s why the line was drawn…

A doting mother, asleep on her pillow – the image of grace and beauty and all that is right with the world, as the moon casts a delicate glow across her angelic face from thither yon window. A sweet, growing babe is nestled at her side. Oh no! Suddenly the tip of little Junior’s toe touches the pesky blankets, which he despises. He simpers, and sits up. He rubs his eyes, looks down at his mother, wrapped warmly in the candy-cloud-cupcake-snuggle-snare of slumber, and in a jealous rage…

She gently rubs her cheek, rolls over, and drifts to sleep once more, plotting revenge on her son and his asshat behavior.

Here’s the thing. I know he’ll outgrow this, because we don’t let it go unpunished. One of these days, he’ll associate the punishment with the behavior, and our speeches about “using words instead of our hands” to communicate feelings will sink in, and the slapping days will be over. Or whatever. I don’t see many 10 year olds walking around slapping people. Rumor has it that most 2 year olds do. But being slapped awake is a new low.

It may be time to nestle my foot gently, but firmly into his squishy little rump and kick him out of the nest with utmost delight (I mean this figuratively, of course – no little birds will be harmed in the making of this film about two parents taking back the night). The kid has a perfectly good room, with a perfectly good bed. I think it’s high time he takes advantage of it.

I’m taking back the night. Damn the consequences.

DISCLAIMER: This proclamation provides no guarantee of success. There is a 99% chance of failure as the quality and quantity of sleep when doing what’s easy is weighed against the certain decline in the quality and quantity of sleep when acting according to our take-back-the-night plan. The risk-benefit analysis will be evaluated upon implementation and the improbable success of this endeavor will be determined at that time.

4 thoughts on “The Slap”

Essays and musings about life as a Midwestern mom, wife, and aspiring Paleo convert. I work full time and write for funsies. You know...when I have time. Which is almost never. I write from the heart, which sometimes includes poop and swearing. This isn't The New Yorker.